This is Part 2 of an article on stripping and refreshing a very tired 1977 z650, purchased as a complete bike but not running. It was owned by a lady in Toowoomba who was moving overseas (apparently).

The re-assembly phase began straight after we stripped all the parts from the bike. I say ‘we’ as my then partner Heather did a lot of the re-assembly work. First we catalogued all the parts to be powder coated and took them to Northside Powder Coaters at Everton park here in Brisbane. They started straight away on the job and completed the work in 3 days! 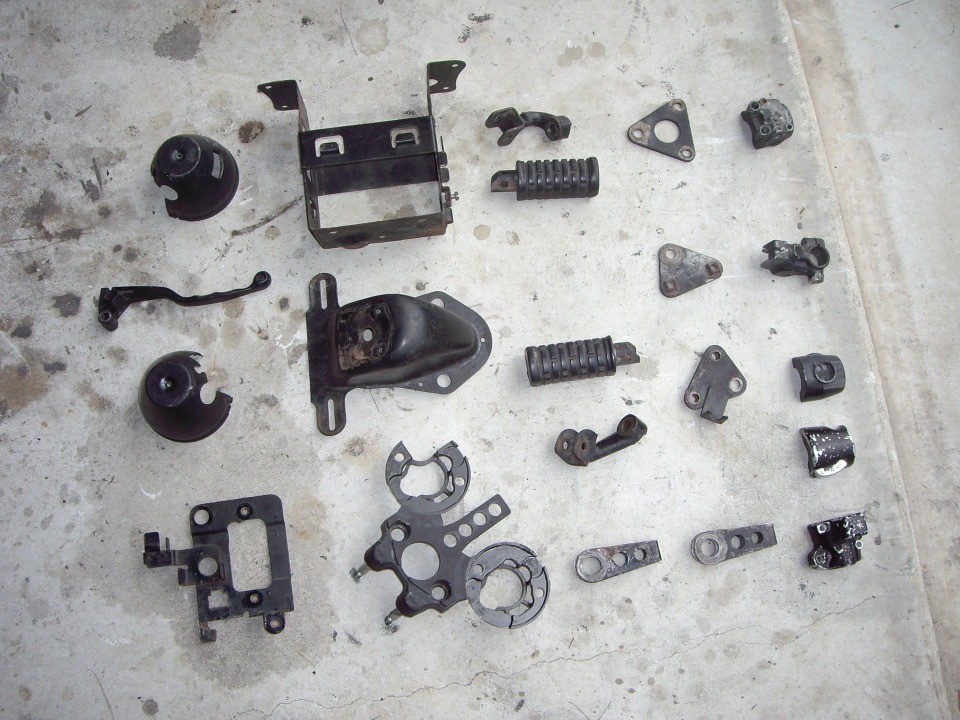 A photo and a list of all the parts is the way to track anything going out for work.

The bottom studs in the forks were badly corroded away (front facing ones) and were not even remotely safe so I decided to remove ALL of them and replace them. Since they are not an easy item to buy, I just made a new set.

First step was to remove the old ones, after some persuasion with the butane bottle they came one using two nuts to get a grip on the thread.

Using threaded stainless steel rod, I cut four new studs, to cleanup the ends I ground and chamfered the edges, the gloves seamed like a good idea till they split apart!

Below is the new set, I made 4 all up (a bit fuzzy as the camera does not like Macro shots).

Nice screw in fit. Some locktight to secure and they wil be better than new.

To get them tight, use two nuts and a good quality ring spanner.

The turn around from the Powder Coaters is very quick and we have some nice pieces back. They have been done in Satin Black.

The threaded parts are all covered in alfoil, the rest will need a tap put through the welded in nuts

For brackets like these, running the hand tap through them cleans the threads up nicely.

With the frame and all the parts now powder coated, we start assembling the bike.

The engine was not stripped but it did have a few issues that we would tackle latter. It did however clean up nicely so we just need to insert the frame over it and begin. 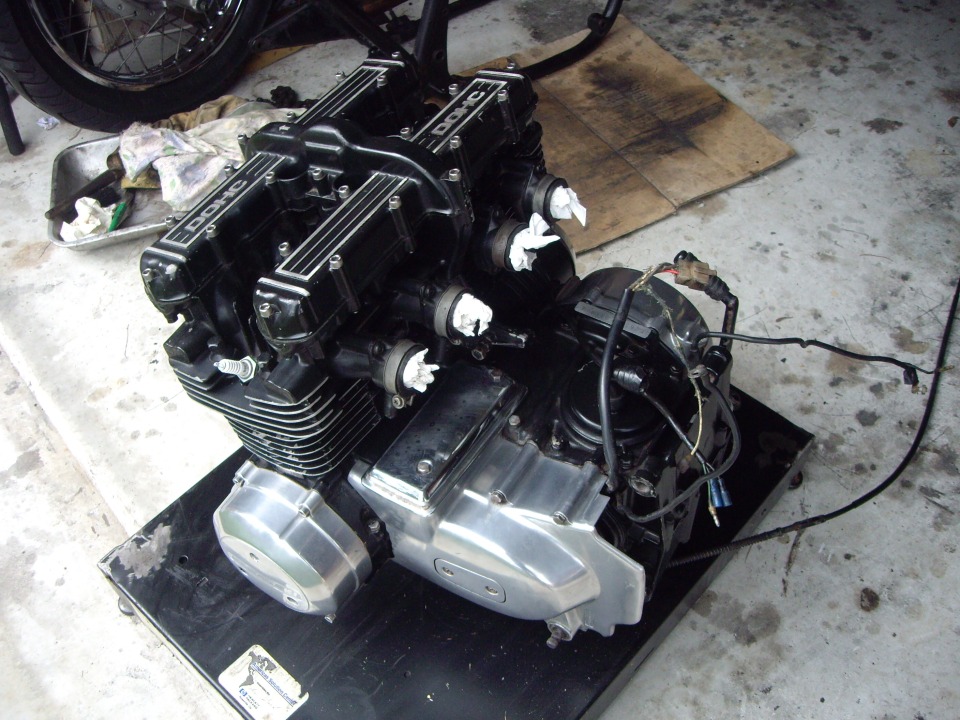 Installing the engine comes next, its the reverse of the removal process, tilt engine and drop (carefully) the frame over the top and bolt it in.

The engine is resting on some padding and I lowered the frame over the top of it. Securing a few bolts will be needed before attempting to move it anywhere.

Assembling the front end was the next step so we installed the triple clamp. To stop powder coating from getting inside the steering stem I chocked it with round timber blocks and a long threaded rod, cleanup afterwards was just a case of removing the threaded rod and the blocks. 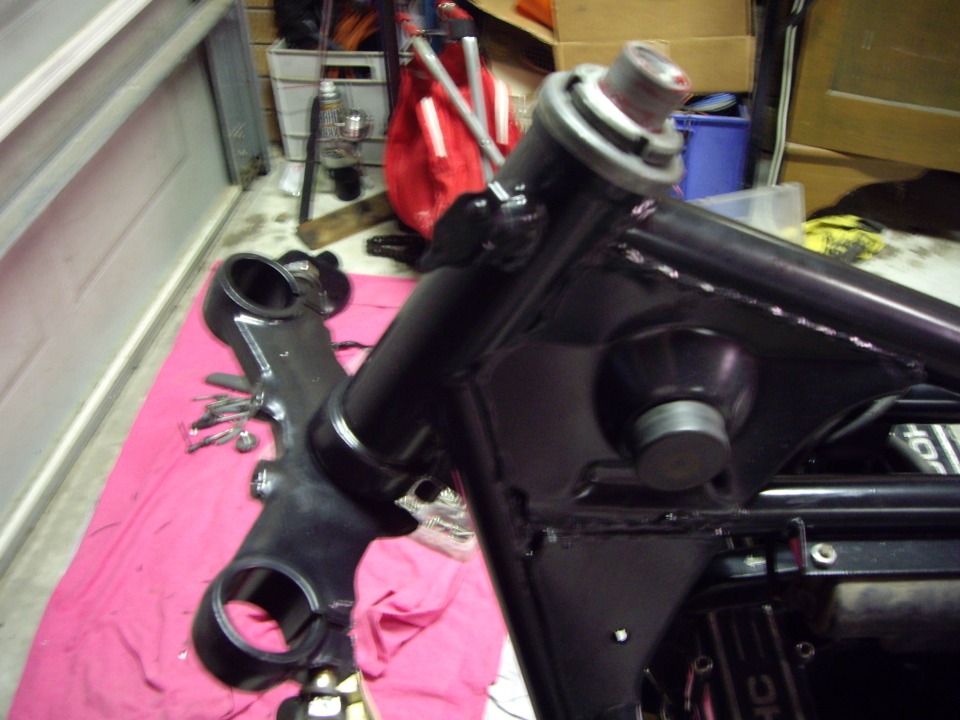 Next we start fitting the rear end components. First I need to fit some new bushes into the swingarm. When it came back from the powder coaters it required some paint to be stripped out on the surface where the bush sits. Then using a custom tool I had spun up a few years ago for my CB750 and z900 we use it to tap the bush in gently, a bit of red grease helps make it an easy job, we also fill the inside with grease and fit a new grease nipple. 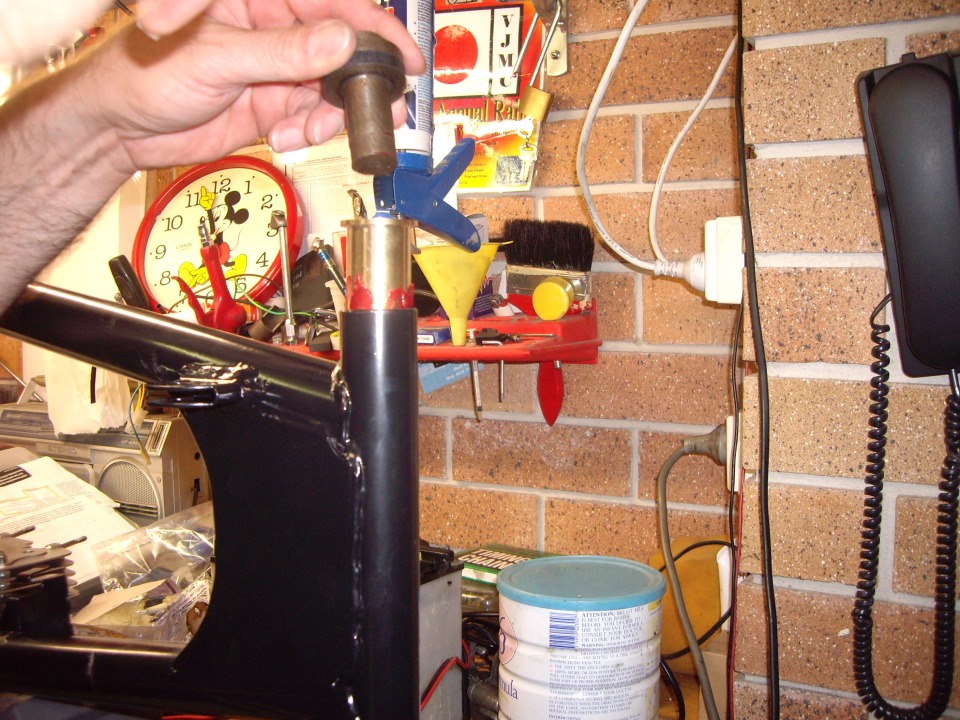 The tool I used to push the bush in was originally made to space the CB750 swingarm bearing in at the right depth but this is not an issue on the z650’s as it has a lip.

Fitting the rebuilt shocks, swingarm and centre stand is easy when you tilt the bike forward! 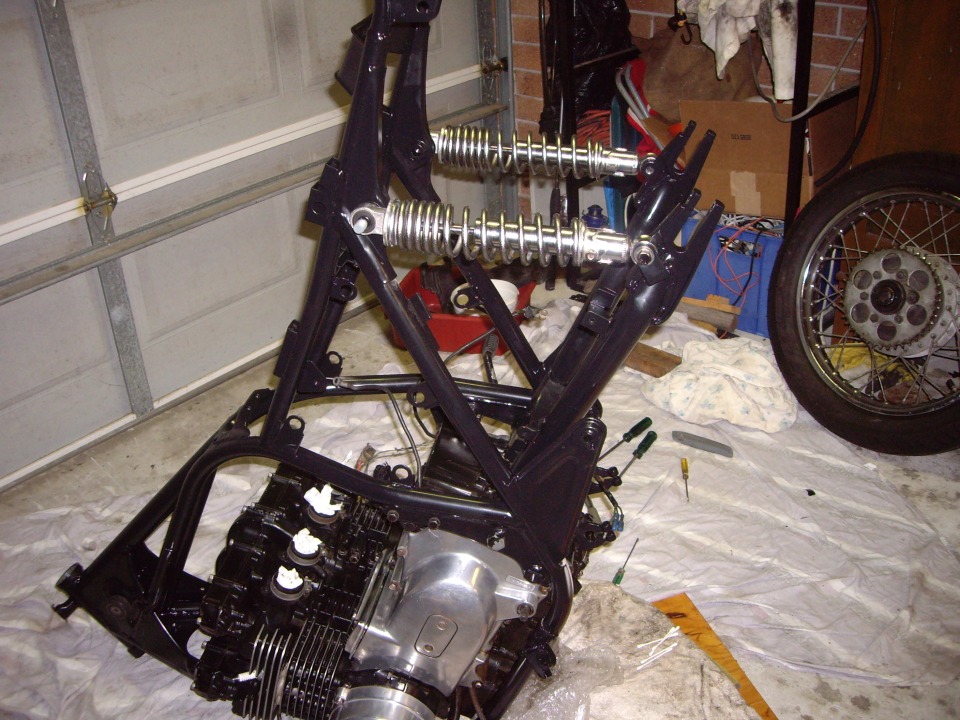 The reason we started on the rear end is it’s easy to tilt the bike up if it has weight in the rear when we come to put the front wheel on later.

Next we fit the rear wheel and brake rod. We will sit the bike up on the centre stand and then rock it back to fit the front wheel. We also fit out the battery compartment and other bits and pieces. During assembly we also cleaned all the threaded holes and studs, and fitted new stainless steel screws with copper-nickel anti-seize on them. 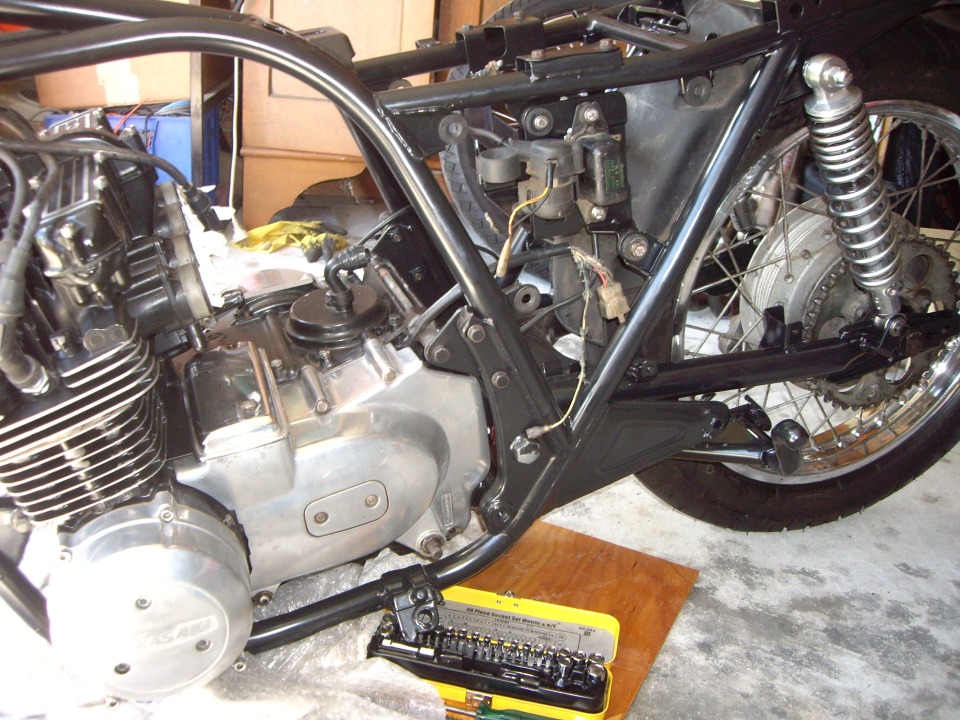 Next comes the foot pegs and brake pedal, the bike is resting on a kiddies chair at the front.

The instruments were fitted, at some point in the future they need to go into Otto Instruments and get rebuilt and calibrated. The top triple clamp fitted means we can trial fit the forks, then take them out and drop the headlight ears in place. 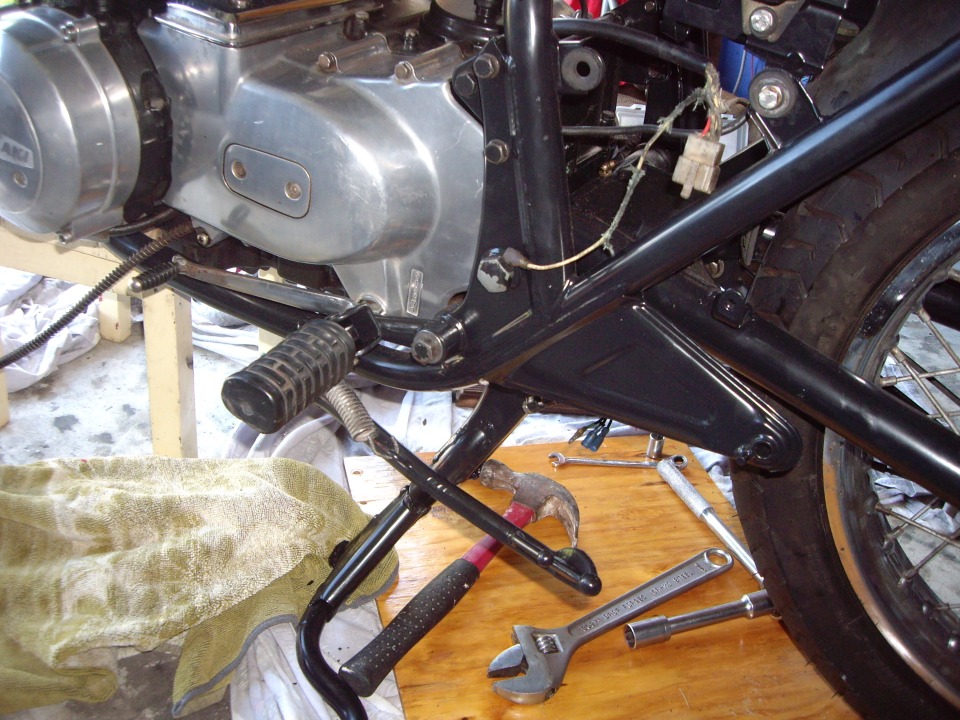 The original fork ears were missing so new ones were sourced from z1enterprises. The forks are now secured and front wheel fitted. Later I will strip the wheel and restore it, but for now its fine after a polish. the forks also need rechroming but we can do that later.

Since we are doing a refresh on the bike, I decide to make some new brake caliper mounting bolts. The originals are Metric Fine pitch so I use a socket head cap screw with a clean shank and cut a new thread on it with an M10 Fine Die. 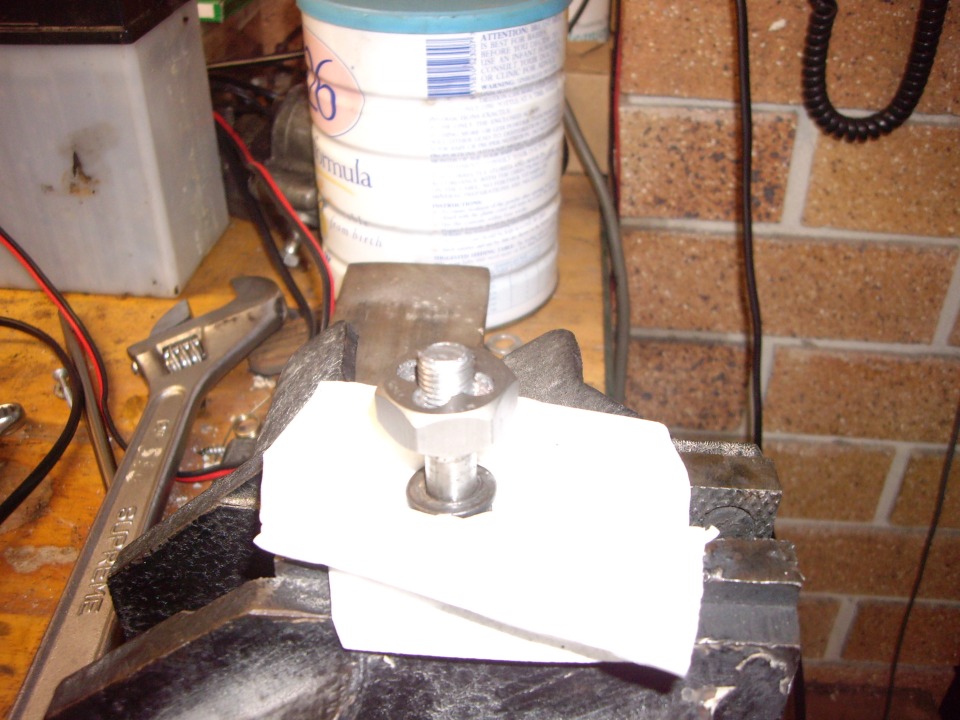 With most of the bike assembled I tackled the wiring harness, it was a mess!